My Stay in a Century Old Hotel... 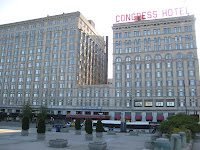 I’m kind of picky when it comes to where I stay.  I base what a hotel is going to be like on the comforters.  I’m sure that’s not really a true assessment but I can’t seem to help it.  I found a pretty good deal on a place and started reading reviews.  They were horrible.  And once I saw two, yes two, that mentioned scabies and bed bugs I decided that wasn’t happening.  My search continued leading me to the place we ended up staying.  It had a decent price and the comforters were not sea foam green with pink splashes.  Still, I had to check out the reviews.  I found out that it’s the oldest hotel in the city.  It was built in the 1890’s.

So, off we go to stay in the Congress Plaza Hotel.  I was pretty excited for this trip.  I don’t take time off of work very often so when I do I try to make it count.  My boyfriend was a bit grumbly at first.  I thing turning 30 got him down a bit…shhh.

I love history and old structures.  There are so many stories hidden in places like that.  The hotel was beautiful.  It did make me kind of sad because there were parts that weren’t being cared for the way they should be.  If it was restored and taken care of it would be absolutely amazing.

In our search for information about the hotel we found some sights claiming that it was haunted.  No surprise there it’s over 100 years old.  Most older places have stories of ghost and strange happenings.  Well, one room in particular was said to be the most haunted.  Stories say that security gets call there most often and that people staying in the room report seeing the shadowy figure of a woman.  As we’re checking in my boyfriend decides to ask for this room.  Room 441. The woman behind the desk stutters and freezes for a moment.  Then she does some tapping on her keyboard and asks us if we are sure.  At this point I’m laughing and my boyfriend is nodding.  So we end up staying in room 441, the most haunted room at the Congress Plaza Hotel in Chicago.

We gave ourselves a midnight tour of the hotel.  We wandered around both towers and almost all of the floors.  Attempted to get into The Gold Room, which is the massive ballroom that’s been there since the place was built.  It was locked.  No surprise there.  There were moments walking down the narrow halls that I felt like I was in the shining.  It was definitely an adventure.  Unfortunately, the rooms aren’t very air conditioned and the bed was extremely uncomfortable.  I can’t report any sightings of shadowy figures or strange sounds but it was fun to take in all history.

We also go to see “the bean”, Millennium Park, and we sat at a corner coffee shop for a while and people watched.  It was a great trip! 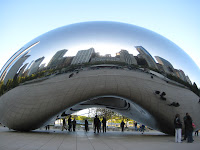 Posted by Britni Hill Books at 8:00 AM
Email ThisBlogThis!Share to TwitterShare to FacebookShare to Pinterest
Labels: Spring time fun