Today I have some fun facts from Kate Roth about her new release Reckless Radiance!  I'm pretty excited for this.  She's a close friend of mine and I've been able to see this project come together.  I know you all will love it!

Now for some fun facts!!


This book has had many different incarnations so today I want to share with you some little known facts about the book and its previous versions. 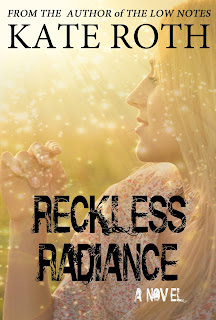 After the loss of her childhood love, Valerie Gilmore runs away from the life she's always known to try to start again. Between her job as a diner waitress and her toxic relationship with the first guy to help her forget her past, Valerie feels more alone than ever before until she meets Russell. He's sweet but strange and Valerie can't help but think he's hiding something. He acts as though he knows her and he seems to be looking past her broken heart, straight into her soul.

Russell has pushed aside the ancient laws of his angel brethren to find Valerie and stay as close to her as possible. He’s forced to contemplate sharing the truth about what he is after a deadly turn of events cause Valerie to run away once more. His feelings for her and a promise he made long ago help him to realize he longs to leave his life as an angel behind for a chance at love.

Reckless Radiance is available on Amazon in ebook format and paperback.

Don't forget to check out the giveaway Kate has going on!!  Lots of great prizes!

Kate will have fun content on her blog all week stop by www.katerothwrites.com to check it out!

Today I'd like to welcome Lila Munro and say Happy Anniversary to Private Pirouette!!


Private Pirouette had been sitting for about a year finished before I turned it loose and passed it into the hands of Jenn over at Rebel Ink Press. I had so many irons in the fire it had been shoved to the bottom of the pile more than once. Originally it was slated to be a series, but was ultimately released as a stand-alone. One of the reasons it was shoved to the bottom of the pile so many times was book 2 Private Impropriety wasn’t going so well and I doubted it would ever make it off the drawing board as more than an idea. Not a few days after Private Pirouette debuted, however, reader demands started coming in as to what was going to happen to the other two heroes, Chaney and Brady.
Okay, maybe there would be a book two…then again maybe not. I dragged it out and started working on it, to no avail. It still wasn’t right. Book 2 is Chaney’s story and I had him originally paired with the Jenni, one of Piper’s friends. The problem with Jenni is she’s just too much of a mess. I know right? The queen of conflict and realmantic having issues with someone with too much baggage? Never thought you’d see that one huh? While preparing the promo pack for Private Pirouette, I went through my files and guess what caught my attention? Yes, Private Impropriety hopped out at me. However, I think I’ve since found the problem—a huge one actually which will nearly require a complete and total rewrite, but one I’m willing to deal with if this story can get off the ground. It seems Chaney is better fitted to Piper’s sister Lacey—there is a scene in Private Pirouette when it seems they may hit it off, but then the nearly absent father of Lacey’s baby reappears and puts the brakes on that…I’m thinking that little pipsqueak needs to go. He’s a loser and Chaney would make a great husband and daddy…we shall see…I know this will make my readers happy to finally get their hands on book 2.
In the meantime, Private Pirouette can be yours for a mere $0.99 from Amazon September 16-18…Come watch the dance readers fell in love with and so did Alec… 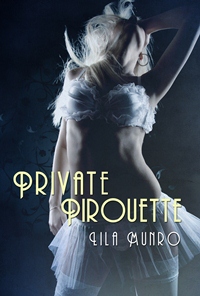 Piper McGee can smell a set up a mile away. She can smell a Marine even further. Born to a dual-enlisted couple who divorced before she was old enough to remember a single family holiday together and proceeded to redefine the very definition of family through several marriages and even more step-siblings, Piper has made it her life’s promise to herself to never become involved with one of the few and the proud. They’re among the most irresponsible people she knows, leaving destruction in their wake and broken hearts paving the way to their next duty station. And in her opinion, Alec Douglas is just another example, until he pries her heart open along with other parts of her, making her question everything she's ever let herself believe about honor, courage, and commitment.

What does a man do with six month’s down time and no warm body to share his bed? For Sergeant Alec Douglas, contemplating that question led him to fall prey to his two best friend’s plan to find him that very thing. They know Alec has yet to stay with any one person for more than a few dates. They also know a tragedy from his past created the problem and while that haunts him, making it nearly impossible for Alec to trust his heart to anyone, they also know he’s a sucker for a challenge. Will the enticement of a few thousand dollars riding on him breaking his own rule be just the thing to break his cycle? Taking their bet might be profitable, but is winning the money they’ve dangled under Alec’s nose worth losing himself to the girl they’ve picked out for him?

In his quest to get her to say yes to his crazy proposal, he tracks her all over town only to discover the beautiful, long-legged blond isn’t the studious book worm he mistook her for. In fact, she's one of Jacksonville’s finest in the form of Orchid, exotic dancer. Her rejection only spurs him to make sure her dancing days are over and she only performs her private pirouette for him, and only him, for the rest of their lives if he has his way.

Please enjoy an excerpt:
With all the shades drawn in her tiny apartment, it was still relatively dark at nine when Piper left her bed.  After a quick shower, she slipped on her soft worn robe and padded into the kitchen to start her day with her usual Coke Zero and chocolate glazed donut.  Alec was lying on her couch on his back with one foot on the floor, one arm dangling beside him, and his mouth hanging open.  She wanted to make a lot of noise just to irritate him, but then had second thoughts.  As long as he slept, she could sit in the chair beside the tiny couch and stare at how good looking he was.
Too bad he was a Marine.  He was definitely someone she could grow accustomed to looking at.  In the dim light of the room, the auburn stubble running over his jaw only added to his rugged handsomeness.  She caught herself staring at his lips, trying to remember the last time she’d been kissed.  Had it been so long she couldn’t recall?  God, how she needed a life.  Just not at the expense of her goals.
She was putting her empty bottle in the recycle bin sitting near the door when she heard her guest stir and groan.  Served him right. He should be miserable.
“Oh, shit.” He moaned and rubbed his head.
“Good morning, Prince Charming,” Piper whispered, leaning over him. “It’s time for Orchid to get ready for work.  Therefore, you need to get up so I can drop you off on my way.”
His eyes flew open and darted around, finally focusing on her face just inches from his.
“In case you forgot, I’m Piper, AKA Orchid, and you’re two first names—Alec Douglas.”
“Yes, I remember who you are and my own name.” He eased up and sat back with his hands on his head. “You wouldn’t happen to have something for a headache around here would you?”
Piper disappeared and came back with two red and blue capsules and a glass of water.
“What, are you rationing?” His nose twisted up and he sounded annoyed.
“No, that’s how much one should take.” She sat in the chair again and pulled her legs up under her. “Okay, now explain this plan of yours to me thoroughly.”
“What plan?”
“Your plan to make me almost rich by the end of the year.”
“Did we discuss that?  Is that why I’m here?  Which is where by the way?” With the glass empty, Alec got up, made his way around the couch, and wandered into the tiny galley kitchen behind it.
“This is my apartment and yes, we discussed it.  You’re here because you threw up in my car last night and weren’t able to tell me where you live.”
Alec shook his head, drank another glass of water, and filled the tumbler again. “It’s very simple really.  Chaney and Brady each put up a month’s pay to be turned over to me once I complete the mission, which is stay with one girl for six months before we deploy again.  That’s where you come in. They picked you at the restaurant yesterday.” He sat once again. “Simple enough, you pretend to be my girlfriend until then and we win an easy fifteen hundred each.”
“What’s wrong with you?” Piper accused.
“Excuse me?” Alec said, scrunching his eyebrows together.
“I said…What? Is? Wrong? With? You?” she repeated slowly as if talking to a child. “Aside from either you can’t hear from too much artillery fire or you have a problem paying attention.”
“There’s nothing wrong with me,” he defended.
“Then why? Why do you need them to choose someone and what’s the problem they can’t believe you’d stay with someone for that long? Are you a man whore?” Piper accused, tapping one foot waiting for his answer.
“I…um…I’ve never stayed with one person for longer than a few dates,” he admitted.
“So you are a man whore,” she concluded.
Thanks for spending a few of your realmantic moments with me, Alec, and Piper today…happy reading!