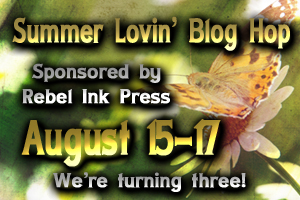 Rebel Ink Press is turning 3 and we're celebrating.  Some of Rebel's author's are sharing their summer love stories, there are titles on sale, and prizes to be won.

I never really had a summer love or even a summer crush.  Lame, I know.  I'm not sure what I was doing when I was younger but apparently is wasn't being recklessly in love.  My characters in Tears in the Rubble did have a summer love though... 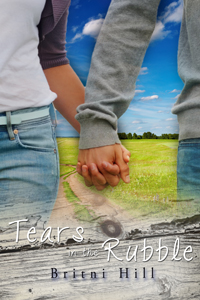 Layla Swanson grew up in the lazy, small town of Hollow Oaks and can’t wait to get out.  She has big dreams and big plans in the big city.  Layla has worked hard and her senior year is nearly at its end.  She can’t wait to go away to college.  And she’s one step closer to getting what she wants. Layla isn’t letting anyone get in her way.
Taylor Scott may not be your typical country boy, but he doesn’t mind Hollow Oaks.  His dreams may not be marked on paper and set in stone, but it doesn’t mean he doesn’t have them.
A chance meeting between the two childhood friends may have Layla second guessing her longtime plan. Their rekindled friendship is leading them down a path neither one could have foreseen.  But with Layla leaving for college, many challenges face them, especially when she so stubbornly sticks to her solo plan.


Is Taylor’s love enough to convince Layla to let him in?  Or when everything falls apart, will Layla run away?


Excerpt:
Layla flopped back onto her blanket and closed her eyes the corner of her mouth curling as she replayed Taylor swimming away. The look in his eyes as he had watched her smooth sun screen into her skin caused a tingle in her toes and a quiver in her stomach. Drifting off a bit, Layla thought about how much she'd actually miss her country summer days.
A wet finger trailed its way slowly across Layla’s warm stomach, leaving a trail of water droplets behind. She shivered but didn’t move. The finger continued its journey, going up her side now, tickling as it went.
"Layla," Taylor said finally, his voice quiet but deep, need lingering in the way he said her name.
She rolled to her side on the narrow dock and found Taylor perched on the ladder beside her, his eyes level with hers.
"What?" She asked sleepy voice, contentedness rolling through her body.
Taylor gripped her thin hip in his hand, a few of his fingers slipping beneath the fabric of her bikini bottoms. The pressure of his fingertips was light but the feeling seared its way to her bones. Electric goose bumps spread across her skin and Layla felt the need to cause the same reaction in Taylor. It was a compulsion she couldn’t ignore. Layla reached out her hand, placing it on his neck. From behind her sunglasses she watched him, propping her head on her
hand and scooting closer to him. The corner of his mouth twitched and her heart picked up speed at his subtle reaction to her touch. Layla ran her tongue slowly across her bottom lip and watched his brown eyes follow the motion. His fingers flexed on her hip. A thrill rushed through her knowing she held this small power over him. Feeling sexy for the first time in her eighteen years, she decided dive further into that world.
Layla pulled her sunglasses off and ran a hand through her blonde waves, letting them fall over her shoulder, a few pieces tickling her chest as she breathed deep. She smiled at Taylor and ran her hand up his damp arm, leaning into him slowly. Watching him watch her. Layla’s heart thumped as she brushed her lips against his. Barely, a whisper of a touch. Taylor sucked in a shuddering breath through his teeth and tried to press his lips to hers. Fighting the urge to give in, she parted her lips slightly and brushed against him again. His lips were warm and soft and Layla couldn’t stand it anymore. Her eyes drooped half-closed and she let him lean in, closing the distance between them. Her head spun as Taylor’s hand found its way further under her bathing suit, the tips of his strong fingers digging in as he parted her lips with his own.

Tears in the Rubble is available on Amazon, Barnes & Noble, and ARe.

Enter below to win some great prizes then head on back to Rebel Reasoning to find out what the other authors have to offer.

Posted by Britni Hill Books at 8:18 AM
Email ThisBlogThis!Share to TwitterShare to FacebookShare to Pinterest
Labels: Blog Hops, Rebel Ink Press, Tears in the Rubble