Hey everyone!!  Michel Prince has a new release called Silly Girl!  Check it out! 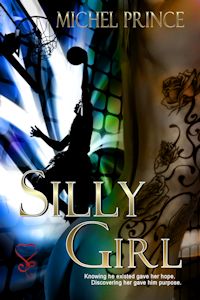 With an all-consuming focus Matthias Jessup has sacrificed his body in pursuit of greatness. But while he’s enjoyed the spoils of being an elite athlete, the physical punishment can only be held at bay for so long. He knows his time is running out and he will have to face his future soon.

Sylvia Kinder is obsessed with Matthias' public image. But now that her fantasy has walked into her life, could it possibly lead to a happy ending? She worries if there's any place for her in his world, much less his heart.

Drawn to each other on a chance meeting, Matthias must look off the court and discover the real world, while Sylvia will have to find the strength of self to not become lost in a world she doesn’t understand.  But those who aren’t ready for a life after the game surround Matthias and are willing to do anything to keep him on the court.

Excerpt:  Pulling on her Columbia jacket Sylvia slid on her backpack then swiped her badge through the time card reader. Taking a deep cleansing breath, she walked back out to see Matthias leaning against the wall scanning his phone. His long index finger was stroking the touch screen and Sylvia’s head filled with thoughts of the finger on her neck finding its way down her body.

This was a mistake.
“You know my tires are practically new…” Sylvia’s voice went higher every time she lied and this was no exception. Her tires were practically bald and couldn’t grip the road if they were covered in honey. “It seems silly to…”
“Prove it,” Matthias’ deep voice challenged her.
“Are you calling me a liar?”
“I think you’re overly cautious and have determined if you drive five miles per hour you’ll have less damage to your body than one night with me.”
Sylvia swallowed the huge lump in her throat and prayed it’d go past her chest without coming back up.
“I told you, I’ll be a gentleman and not touch,” Matthias raised his eyebrow. “What you don’t want me to touch.”
Sylvia licked her lips as she drank in Matthias still leaning against the wall across from her. Even with six feet between them, she felt a current of electricity bouncing back and forth.
“So you gonna play show and tell?”
“Excuse me?” Sylvia tried to find an ounce of moisture in her mouth, but came up dry.
“Your car? Are you going to show me your brand new snow tires or concede you’re afraid of being in an enclosed space with me…alone…on a dark and stormy night?”

You can find Silly Girl at any of these links: