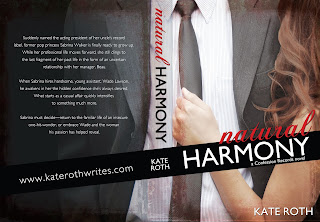 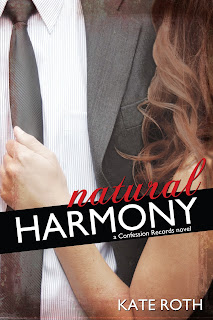 Suddenly named the acting president of her uncle’s record label, former pop princess Sabrina Walker is finally ready to grow up. While her professional life moves forward, she still clings to the last fragment of her past life in the form of an uncertain relationship with her manager, Beau.
When Sabrina hires handsome, young assistant, Wade Lawson, he awakens in her the hidden confidence she’s always desired. What starts as a casual affair quickly intensifies to something much more.
Sabrina must decide—return to the familiar life of an insecure one-hit-wonder, or embrace Wade and the woman his passion has helped reveal.

Natural Harmony is a stand-alone romance and the first in the Confession Records collection.
Cover art by Jennifer Streif
Check out the rafflecopter for a chance to win an advanced copy of the book!

Excerpt :
He stepped off the elevator behind her and followed her silently as she led the way down the long dark hall to her office. She unlocked the door and walked in without turning on a light. Wade stood leaning his shoulder against the doorjamb, watching as she fumbled around in her desk drawers for only a few seconds before she retrieved the phone. A loose grin formed on her lips as she held the phone in her hand and when she looked up at him he projected a similar smile back.
Something happened when their eyes met through the dark in the place where she had hired him, the place where he had touched her arm and assured her she was the boss. Sabrina’s face fell, her tongue swiped over her bottom lip, sucking it into her mouth for a moment before letting it pop back out. Wade couldn’t breathe. Sabra.
Her brows drew together as she stepped toward him. Wade could see her breathing picking up, shamelessly glancing at her chest. He heard himself swallow hard when she finally reached him. She looked up at him and pressed her lips together again. She’s your BOSS, his head screamed.
Sabrina’s hand moved out in front of her and Wade barely flinched at the motion. Her fingertips landed on his chest and he wanted nothing more than to sigh at the feeling, but he tried to stay cool. She was staring at his chest and her own hand as it slid down the panel of buttons on his shirt. When her hand stopped at the waistband of his black slacks, he couldn’t hold in the trembling breath that made its way out of him. Her eyes flashed up to his again. Fuck it, it’s just a job, he thought. Just as he reached to slip his hand to the back of her neck and pull her close, her cell phone blared through the office. She jumped and looked down at it in her other hand. When she looked at him she sighed with that same unnamable look in her eyes.
“It’s late,” he said.
Sabrina nodded. “And I’m drunk,” she added with a crestfallen smile.
“Right,” Wade uttered.

About the author:
In 2008, Kate Roth decided to get real about her love of writing. She signed up for a course after-hours at the local high school called 'So You Want To Write A Book?'. Indeed, she did! For years Kate had been dreaming up love stories in her head and she'd even managed to write a few of them down but it was that class that gave her the drive to finally do something more with her ideas.

Kate is inspired by music, film, art and of course other authors as well as the wealth of stories she has heard through her years as a professional hair stylist. She is a small business owner and lives in Indiana with her husband, Adam and their dog, Sampson.